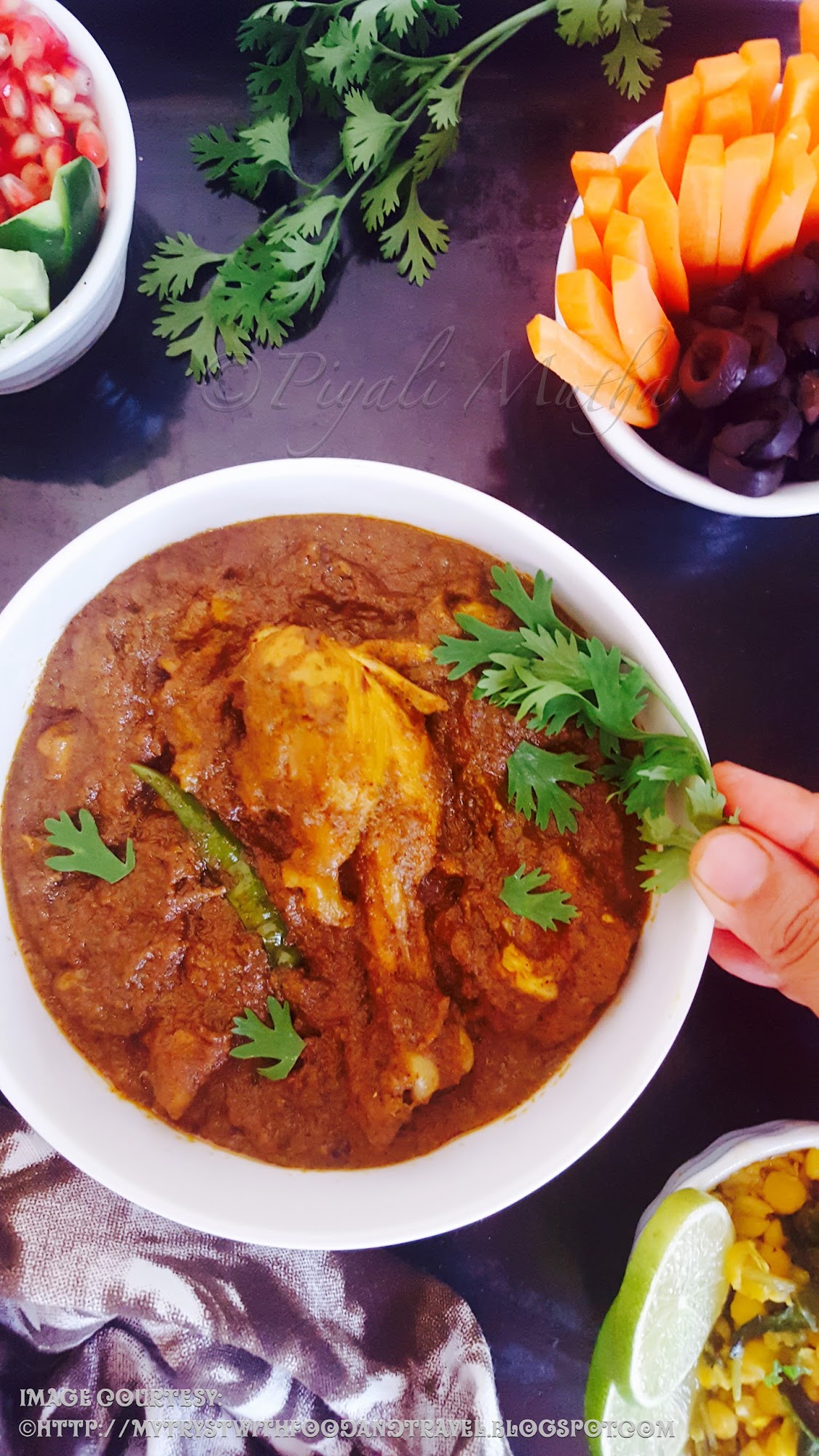 It was the year 2010, when laden with a couple of suitcases I had taken a very bumpy flight to a really tiny airport in Goa. Mr. S was there for almost a month, living out of hotel food which had got his system a little haywire. So here I was to get his gut back on track with some homemade food. In the week that we were house hunting in Miramar, Panjim I did get a fair chance of treating myself to full fledged Goan fare. Most of the times I would be by myself and undertake small culinary adventures. Be it a visit to the Spice Gardens or a taste escapade at the Saturday Night Market at Arpora, a rendevous with the Poder (the Goan breadmaker, an adaptation from the Protuguese padeiro) or sampling a mouthful of Bebinca topped with Vanilla ice~cream at Infantaria cafe in Calangute or simply perching myself up next to a window seat at the waterfront restaurant in the Goa Marriott Resort, right on the Miramar beach, experiencing Goan cuisine at it's best, I surely did have a true blue Goan Style blast. 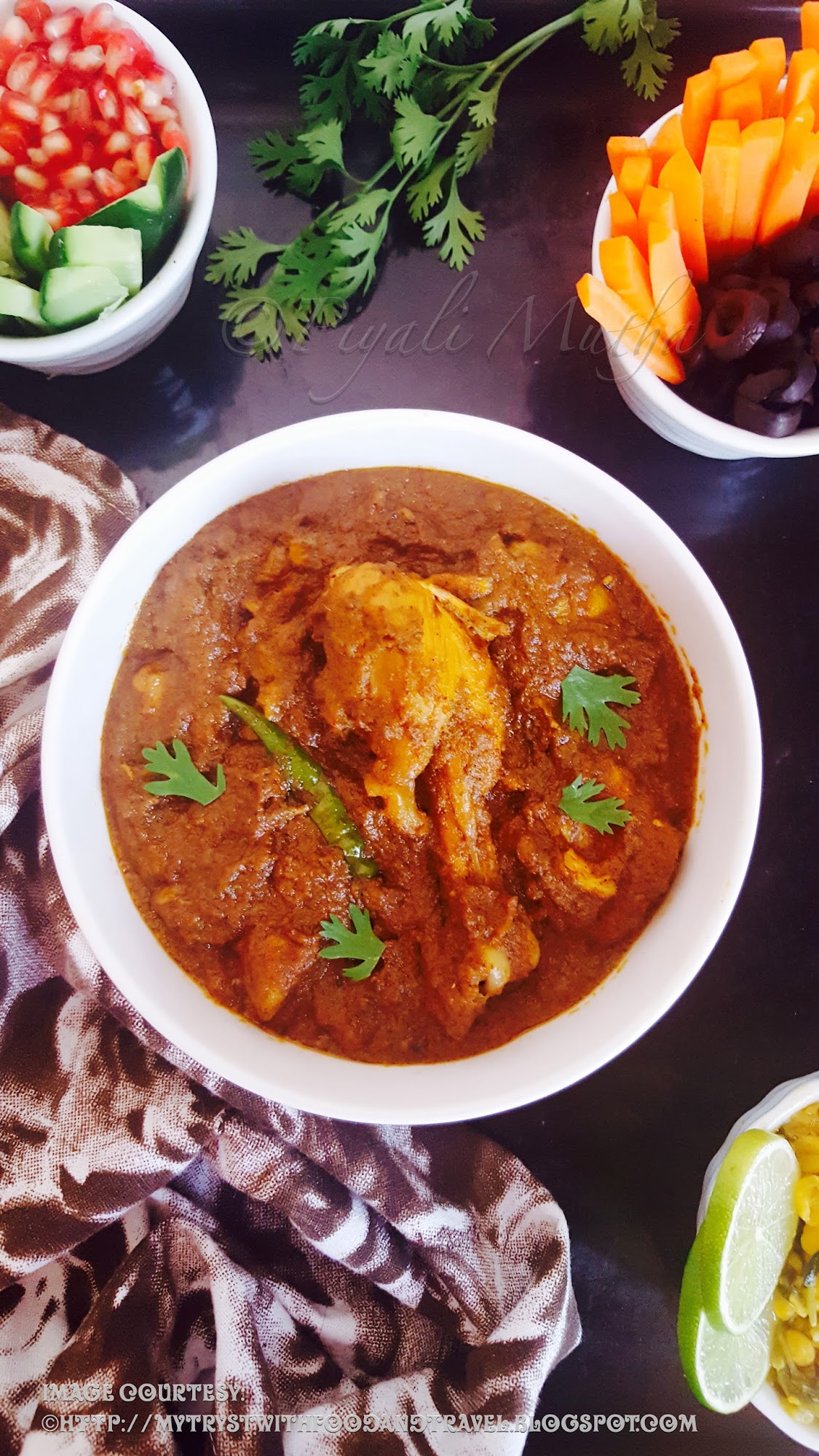 Looking out endlessly at the sparkling waters of the Arabian Sea kissing the sun tanned Miramar beach I would happily tuck into steamed rice lapped up in a very fragrant, luscious and an array of exotic spice infused Chicken Xacuti (pronounced Shacuti). In between spoonfuls I would sip into a kokum drink which would tingle my tongue with it's sweet sour notes, as I would slowly place another spoonful of that moreish curry into my mouth. Not that this was the first time I was tasting Chicken Xacuti, but having a dish from the place of origin is an altogether different affair. Chicken Xacuti is a dish which was weaved into the culinary fabric of Goa by the Portuguese. However the Portuguese cooked their Chacuti de Galinha to be a brown hued curry whereas the Chicken Xacuti is resplendent in a red coloured hue.

At my outings I was always regaled by tales of Goan food from the local servers at restaurants and cafes, which is an indication in itself how proud the Goans are and how zealously they carry on their culinary legacy. Although Vasco Da Gama was the first Portuguese to land on Indian soil (he landed in Calicut) in 1498, it was only in 1510 that a Portuguese Admiral named Afonso De Albuqerque attacked Goa and the Portuguese took over Goa from it's former ruler Ismail Adil Shah. It was Admiral Afonso De Albuquerque who initiated the practice of Portuguese men marrying local women which gave rise to the present day Goan cuisine a perfect amalgamation of the ancient Indian cuisine with the classic Portuguese cuisine.

The Portuguese brought with them chillies, potatoes, tomatoes, pineapples etc. which was slowly integrated into the local Goan cuisine. In the 400 years that the Portuguese ruled over Goa they left a strong culinary imprint in the Goan cuisine, literally rustling up many a new dish which were a marriage of local and Portuguese flavours. The Goans were introduced to the art of bread making and the Goan Pao (which is a portuguese word for bread) a true masterpiece, has been a part of its food heirloom ever since. Vinegar unknown earlier became a must have kitchen essential and yeast was replaced by a local Palm Toddy as a requisite for fermentation. Even table etiquettes changed and cutlery became an important part of the dinning table.

Preparing Chicken Xacuti is a labour of love, where you first assemble the entire list of spices, then grind them to a very smooth paste to get the Xacuti Masala ready. The chicken is marinated in phases so that it absorbs all the flavours and aromas totally. I was told that the secret to a brilliant and overtly tasty Chicken Xacuti is to finish off the curry with a lavish sprinkle of fresh coriander leaves and coconut slivers. Now there are many different recipes for Chicken Xacuti , but if you go through them, you will see that coconut, chillies, turmeric, coriander etc. are common to all. The recipe I am sharing here is my favourite from all the Chicken Xacuti that I have had till date. It's a recipe of Chef Alphonso Periera and I love layers of  flavour that the Chicken acquires from marination in phases and also from the stupendously fragrant Xacuti Masala. This is a dish which uses a whole lot of spices, but is mild on the tongue and a true powerhouse of flavour. Once you eat Chicken Xacuti you will be tempted to savour this dish again and again. By following my recipe which I have very clearly and in steps explained, you can rustle up the same Chicken Xacuti in terms of taste as that of any which you will eat in a local restaurant in Goa. So let's take a look at the ingredients.

1) Wash the chicken pieces. Sprinkle turmeric and salt on the pieces.

** Nicely massage each piece. Cover and leave to marinate for 5 minutes.

2) Take a grinder or food processor. Add all the ingredients under MARINADE 2

3) Take a frying pan. Pour oil. Add all the ingredients under FOR WET MASALA, except coconut. Fry till onions brown a little.

**Add coconut.
**Fry for a minute or till all the moisture from the coconut evaporates.
**Transfer to a plate. Keep aside

4) Now take the same frying pan. Add all the ingredients under FOR DRY MASALA, except turmeric powder.

**Dry Roast the spices on medium heat(taking care that they do not burn), till fragrant. Remove from flame, cool.

5)  Take a grinder and transfer the contents (dry roasted whole spices from step 4) first from the frying pan.
NOTE ~ We grind this first because their are whole spices which may not grind into a smooth paste if we grind both dry masala and wet masala together.

6) Now you can transfer from the plate MASALA from step 3.

** Grind everything, adding a little water if required to a refined and very smooth paste. Your XACUTI MASALA PASTE IS READY.

**Add the marinated Chicken. Cook for a couple of minutes.
Add the XACUTI MASALA PASTE. Add water. Mix. Check for seasoning. Add salt if required.
Mix it well. Cook the chicken covered on high flame for 5 minutes. Simmer and cook the chicken till done.

** The Secret to a great tasting Chicken Xacuti, is "to add freshly ground coconut and coriander just before serving" ~ As revealed by a lady who won the trophy in a Chicken Xacuti making cook off in Goa for the best dish.

** The Chicken Xacuti Curry has a thick gravy.
** The Xacuti Masala is fried and roasted separately in two different steps. If you look at the ingredients of Wet Masala and Dry Masala you will notice that both cannot be fried and roasted together.
** You can prepare the XACUTI MASALA well in advance and store for a month or more in a glass bottle refrigerated. This way you can save 20 minutes from the cooking time.
** Also marinate the chicken the night before and finish your cooking in 15 ~ 20 minutes

Would Love To Hear From You. Do Leave Your Valuable Feedback In The Comments Below. If You Have Tried This Recipe Please Let Me Know How It Turned Out. If You Have Any Queries Regarding This Or Any Other Recipe In My Blog, Please Feel Free To Leave A Comment Here Or Email Me At piyalimutha@gmail.com . For The Latest Updates Of My Blog And Loads Of Food Stories Stay Tuned To My Facebook, Google+, Twitter, Instagram, Pinterest, Flipboard Accounts. Let The Food Adventure Continue In Your Kitchen...