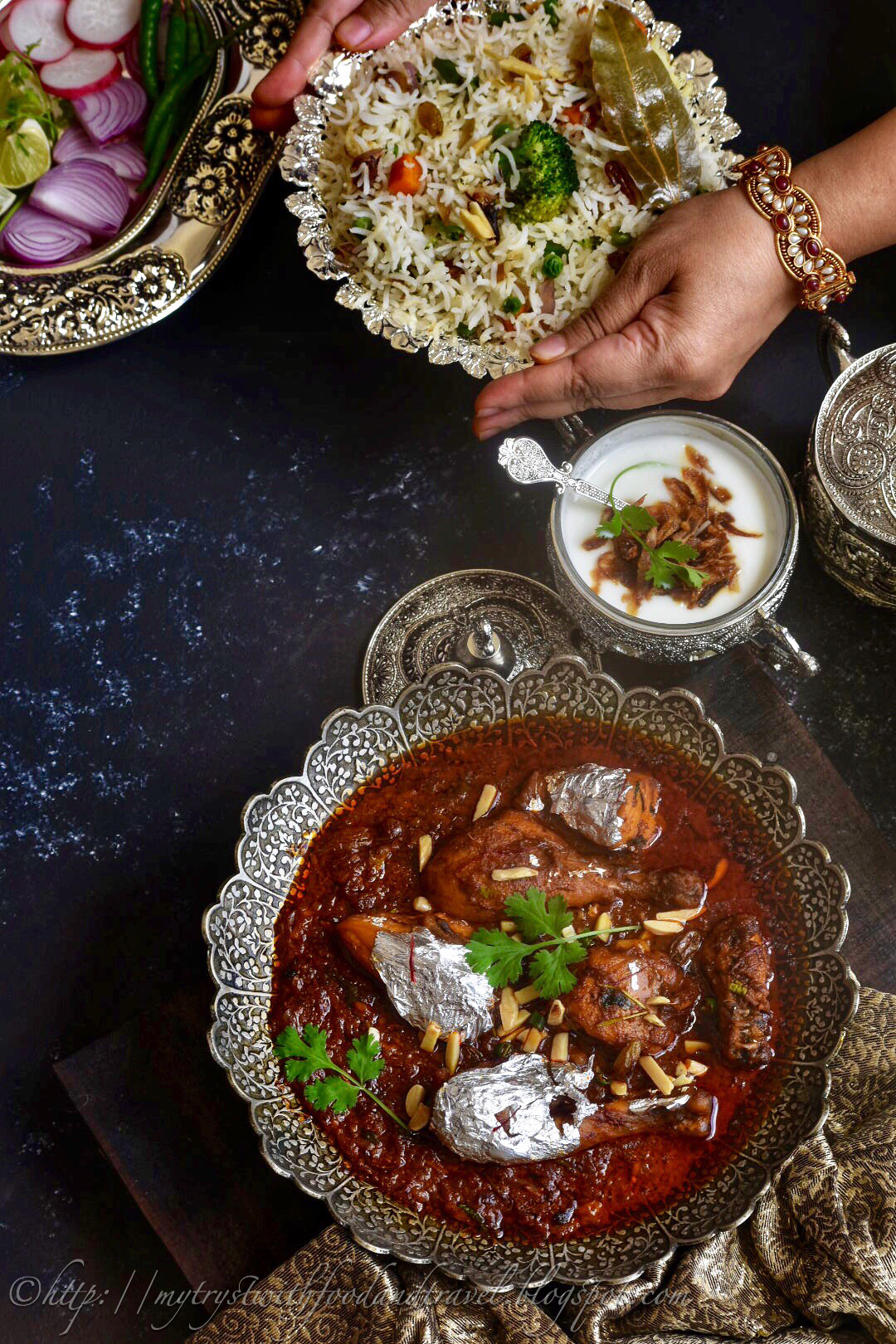 Korma Asafjahi is a dish whose recipe dates back to the beginning of the twentieth century AD. This dish originated in Hyderabad and the recipe was gifted to Raja Dalip Singhji, the then ruler of the erstwhile state Sailana which is in the current Indian state of Madhya Pradesh, by the Nizam of Hyderabad. Raja Dalip Singhji had a repertoire of more than 5,000 hand written recipes which he had collected from different princely states of early twentieth century India. 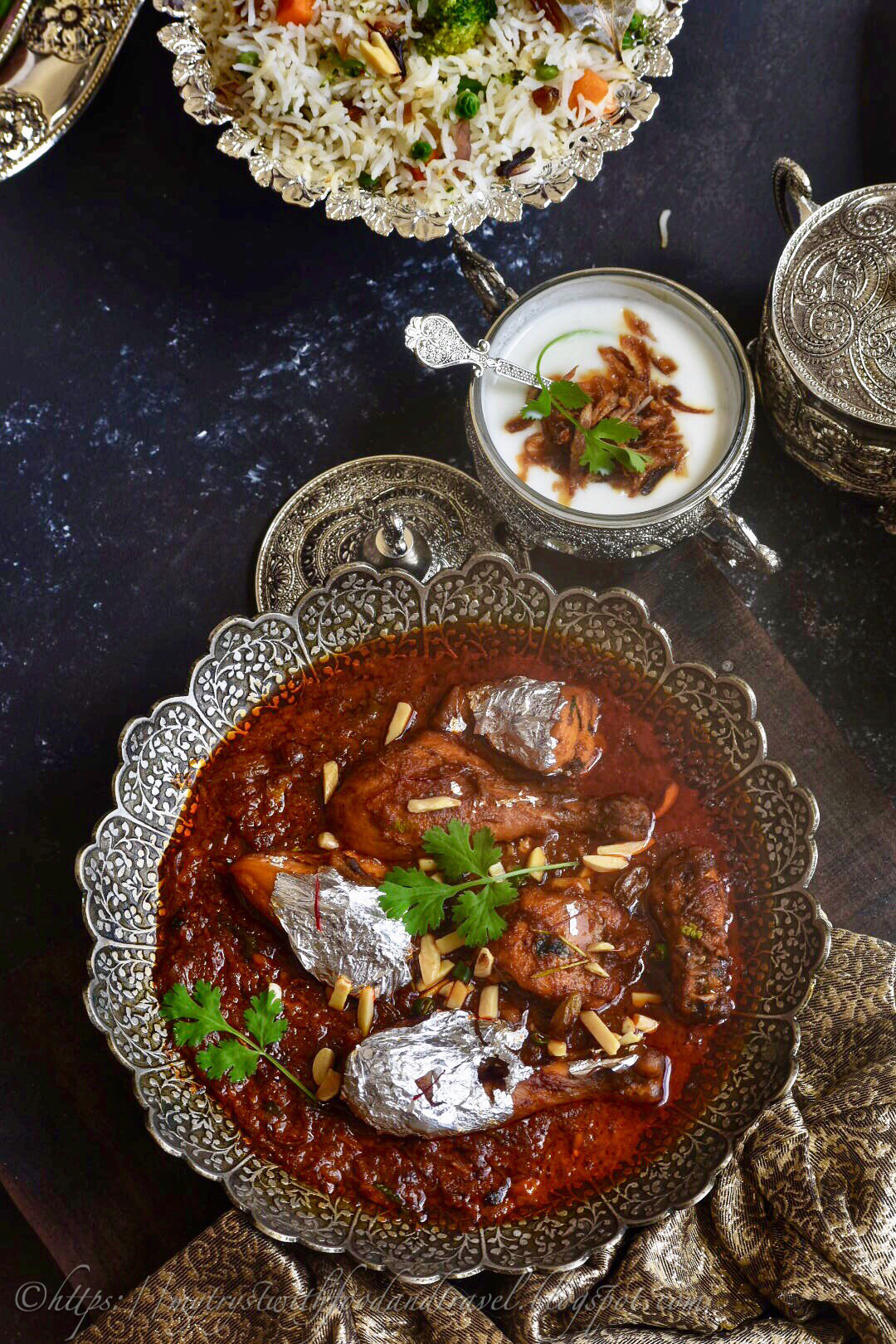 If you are wondering why a king would be interested in collecting so many recipes then let me tell you the story. While on a hunting trip with his entourage in 1890, the king lost his way and was stranded in the forest with a few guests but no cook. The irony was that although all the ingredients which could fire up a meal fit for a king was present, no one in that group knew how to cook. After that episode the king took upon himself to master the culinary art which was unheard of a King and went on, not only to master the art of cooking, but documented every single recipe that was cooked in the Royal kitchen or that his highness ever tasted.

His son Raja Digvijay Singhji was an equally passionate culinary enthusiast, who not only carried on the food legacy of his father with equal zeal and vigour, he went ahead, published a book with a few recipes handpicked by him from his father's mammoth repertoire of recipes. His penchant for perfection, immense love for each dish which he meticulously crafted and cooked again till the dish left an indelible mark on everyones palate, led to the Sailana Royals inheriting a treasure trove of the finest Royal cuisines from different princely states from the early 20th Century.

I was lucky enough to have a rendezvous with the grandson of Raja Dalip Singhji, the present day ruler of Sailana, his highness Raja Vikram Singhji. Those days I wasn't into Blogging and didn't capture the meeting. But I did get my hands on the recipe of Korma Asafjahi and have been cooking it in my kitchen since then. Korma Asafjahi is cooked with finest quality of mutton / goat meat from the leg or shoulder and honestly, I do prefer it over my Chicken version. Unfortunately I cannot cook mutton / goat meat as often as I would like to because of the red meat restriction in my family. Therefore I have cooked Korma Asafjahi using chicken. Below please find both the original recipe & the recipe as I cooked the dish. I have only made two changes from the original recipe.

So let's take a look at the ingredients we require to cook Korma Asafjahi . This recipe belongs to the Royal family of Sailana and I am glad to have cooked, savoured this dish time and again.

* Place the yogurt in a tea strainer. Place the strainer over a bowl making sure the bottom of the strainer doesn't touch the inner cavity of the bowl. Leave for two hours. Keep emptying the bowl from time to time. If you want to save time, use Greek Yogurt instead.

* Now to the ghee in the pan add finely sliced onions and fry them till golden brown.

* Transfer this masala into the pan where the chicken is simmering. Add salt to taste.

* Mix everything in the pan nicely ensuring the chicken pieces are coated with the masala.

Korma Asafjahi is ready to serve.